Do Snails Have Teeth? A Closer Look 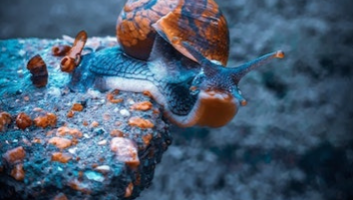 If you’ve ever had a snail in your garden or on your patio, you may have noticed it eating something. Whether you have seen them munching on vegetables or drinking up the morning dew, you may have wondered, “Do snails have teeth?“

A closer look at the snail may provide some answers.

Do Snails Have Teeth?

Snails have tiny teeth that are arranged in rows on a chitinous ribbon. Together they form a tongue like a human, called a radula (pronounced: RAH-duh-luh).

Snails use their tongues to capture food. They grind the food up with thousands of tiny teeth that look like hooks. Then they slide it inside their mouth. Some predatory slugs like Welsh ghost slugs even have radulae with razor-sharp teeth.

Just How Many Teeth Do Snails Have?

Snails aren’t known for biting. But believe it or not, snails have thousands of teeth. And while they may not be as big or as sharp as human teeth, they’re still pretty impressive.

So, if you’ve been wondering just how many teeth do snails have? The number of teeth can vary by species. For example, the garden snail, one of the most common garden snails, has approximately 14,000 teeth. Other species can have up to 20,000 teeth. But most snails have somewhere between 1,000 and 12,000 teeth.

Unlike human teeth, snail teeth are not attached to the jaw. Instead, they are part of the radula, a moveable ribbon-like structure covered in tiny teeth and arranged in rows.

Snail teeth do wear down though and are regularly replaced like shark teeth. In this process of regeneration, the new teeth move forward from behind to take their place. It’s how snails can keep their radula throughout their lifetime.

According to a team of engineers from the U.K., snails’ teeth are made of one of the strongest natural materials in the world. They may even be stronger than spider silk!

Snail teeth are made up of thin mineral nanofibers and protein called goethite, which is an iron-containing crystal. This material is believed to be tougher than spider silk and could be the strongest biological material on planet earth today!

What Do Snails Use Their Teeth for Anyway?

We often think of snails as gentle, plant-eating creatures, so what do they use those sharp teeth for?

Snails use their teeth for a variety of purposes, including eating and getting around. They also don’t just eat plants. What snails eat depends on their species, but they are quite adaptable eaters.

Most snails are herbivores, and they use their teeth for grinding up plant matter. There are, however, a few species of snail that are carnivore, omnivores, and/or detritivores. They will often consume anything small enough to fit into their mouths. This can include:

Some species of snails even have sharp teeth they use for preying on other animals. The cone snail, for example, has a venomous tooth it shoots out of its mouth, paralyzing its prey and killing it so they can eat it.

Snails also “bite” their food using their jaw and then use their radula to grind up the food. The radula slides over the surface of whatever it’s about to eat. Then scrapes off softer parts from plants such as algae or leaves—and sometimes even from rocks!

While they might not be the most dangerous creatures out there, it’s pretty amazing what those little snail teeth can do!

A Snail’s Contribution to the Environment

We often see snails as pests, but they can be a valuable asset to the environment. For example, they are a key part of the food chain, providing food for many different animals. This includes:

Snails are also excellent recyclers. They consume dead leaves and other organic matter with their tiny teeth. This helps to break it down into rich compost that can nourish plants.

Other animals can also use snail shells for shelter. Hermit crabs, for instance, often live in shells that snails have abandoned.

Snails help to create a rich and diverse habitat for other animals. Many species of snail are now thought to be essential indicators of ecosystem health because of their contribution to the environment.

So next time you see a snail, take a moment to appreciate all the good they do for our planet.

The Fascinating World of Snails

Thank you for joining us as we answered the question: “Do snails have teeth?” If you’re looking to add some snail facts to your repertoire, then hopefully this article has been helpful.

Snails are fascinating, and it’s always interesting to see the different ways they can adapt and thrive in their environments. We hope you enjoyed learning about snails and their teeth—and maybe even learned something new!

If you want to learn more about snails and how they live, then we recommend checking out some of our other articles on the subject.