The garden snail (Helix aspersa) is a terrestrial gastropod mollusk and one of the best-known species in the world. It is so common that it is one of the most proliferated terrestrial mollusks.

The helix aspersa is also known as “European Brown Garden Snail,” but its scientific is under discussion. Some scientists think this snail is “Cornu aspersum,” “Cantareus aspersus” or “Cryptomphalus aspersus.”

This species is native to Europe but now lives in several parts of the world where it has become a pest of crops and gardens.

The Helix aspersa is an air-breathing snail, which has a single lung. They have a brownish soft body, covered with slimy mucus and yellow or cream-colored shells with brown spiral stripes. The shell of this species has a height of about 0-9-1.3 Inches, and a width of 0.9-1.5 inches and a lip appears at its edge when an individual is old.

It is a small mollusk, with a shell that has a sphere shape and a slightly rough surface, with about 4 or 5 spirals. Not all individuals have the shell of the same color; some have it dark brown, but the majority has it light brown or with a golden hue; also, it shows several brown or yellow stripes. This shell has a large opening whose edges are white.

This mollusk has a soft body protected by the shell, but when it is not feeding or when it feels danger, it retracts to its shell.

The garden snail has a flat “muscular foot” that helps it move with a gliding motion aided by the release of mucus to reduce the friction with the surface. This mucus is the reason of the trace that snails leave when they move around. 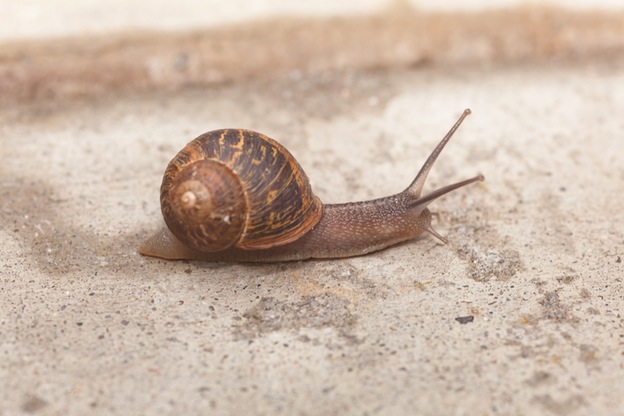 It is a snail native to the Mediterranean region but now is in many more areas of the world, which makes it a species of wide distribution and presence on all continents, except Antarctica. Individuals of Helix aspersa dwell in the lowlands of Great Britain, in the Mediterranean, in Western Europe, in North Africa including Egypt, in the Iberian Peninsula and the Middle East, including Turkey.

However, these snails now dwell in several places where they are agricultural pests. Taken to the United States long ago, it has prospered in some regions. It also inhabits after being introduced in Australia, New Zealand, Haiti, Mexico, Chile, Argentina, South Africa and some islands in the Atlantic Ocean. This species arrived at these places either accidentally hidden in plants or vegetable shipments or intentionally introduced for some purpose.

It dwells peacefully in places of temperate climate, either inhabited or not by humans. It usually lives in forests, meadows, hedges, farmland, gardens and parks.

The species is herbivorous and consumes many types of plant matter. It finds its food in fruit trees, herbs, cereals, flowers and bark of trees, but occasionally it adds to its diet organic matter in decomposition, either vegetable or animal.

Because it frequents crops for food, it is often considered an undesirable pest.

The garden snail mouth is beneath its tentacles, and it has a toothed ribbon called the radula, which is used to fragment its food. This structure is exclusive of mollusks, and most of them have one.

The garden snail is a terrestrial species with nocturnal habits; it does most of its day-to-day activities at night or very early in the morning, but if it rains during the day, it usually goes out.

In hot or drought periods, Helix aspersa retracts in its shell and covers the opening with a layer of mucus called epiphragm, which helps to keep the moisture inside and avoid the attack of animals that can kill it, like some ants. After doing this, it enters a state of inactivity that compares to hibernation. But not all snails hibernate. For example, in Southern California, young individuals are often active throughout the year.

Some of these snails hibernate during winter months, especially when they are mature, but they return to activity with the spring.

They are extremely slow as their fastest speed is only 1.3 centimeters per second. 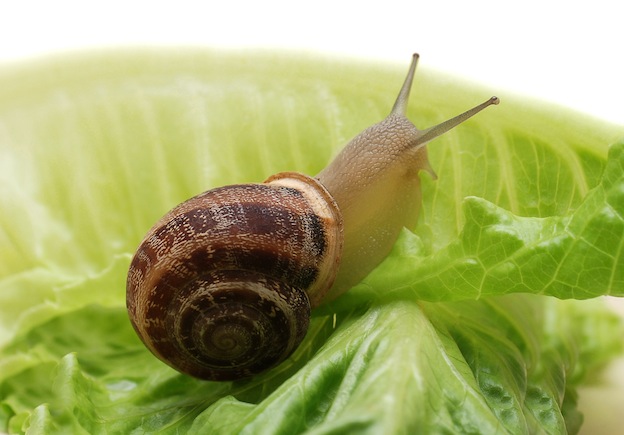 Close up to garden snail on green background

Like other gastropod mollusks, the Helix aspersa is hermaphrodite, since a single snail has male and female reproductive organs and therefore, can produce reproductive cells of both genders. However, they usually mate with another snail for fertilization; even tough self-fertilization is possible for this species.

A garden snail reaches sexual maturity between its first and second year of life and the breeding season is at the beginning of summer. In the short process of courtship, male and female touch each other and then each inserts the other a mucus-covered calcium structure, known as the “love dart,” which could help to survive spermatozoa. Then both insert their penis into their partner, and the sperm is transferred and stored until the eggs are mature and ready to be fertilized. The entire mating process requires 4 to 12 hours.

During the mating process, they fertilize each other, and they both will lay around 80-86 eggs about 3 to 6 days after the copulation. Each snail will create a nest digging a hole in the soil with its foot to deliver its eggs. After excavating about 1 to 1.5 inches, they drop the eggs in the nest. Hatching occurs two weeks later if it is summer.

Gardens snails can produce up to six batches of eggs in a single year, and each newborn will take one to two years to mature.

Garden snails are a food source for some animals like lizards, frogs, and worms. Predatory insects and other species of snails will also eat garden snails.

Some birds, especially ducks will feed on these snails.

This species is edible, and it is sometimes used for cooking, although it should not be confused with the helix pomatia, the “Escargot.”

Although it is considered a pest in most places, it has acquired popularity in the cosmetic industry because of the regenerative properties of their mucus.

The garden snail is not threatened, but given that it is considered a pest, humans try to kill them to avoid losses in crops. In contrast, this snail is edible, and in some countries like France and Spain, they catch them for food. 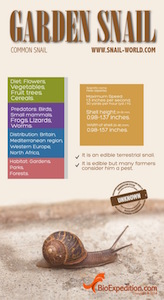