The Roman snail, burgundy snail or edible snail, is a gastropod mollusk and one of the most widely known and distributed snail species in the world. This species is also known because it is the snail used in the exclusive French cuisine where is called “Escargot.”

It is a big snail, whose shell is about 1.1-1.7 inches high, and about 1.1 to 1.9 inches wide. It constitutes about one-third of the total weight of the snail and protects its internal organs. It has a brown color, 3 to 5 bands or darker stripes and 4 to 5 spirals. The opening of the shell is large, with white edges.

The Helix pomatia is an air-breathing land snail that has a creamy to light brown shell with darker brown bands.

Roman snails have a single lung and a muscular foot that helps with locomotion. The foot contracts to produce movement and glands within it release a mucus that reduces friction with the underneath surface, reducing risks of damaging their skin.

Another important anatomical feature is the two pairs of tentacles in the head. The uppermost pair has the eyes, while the lower contains smell sensors. 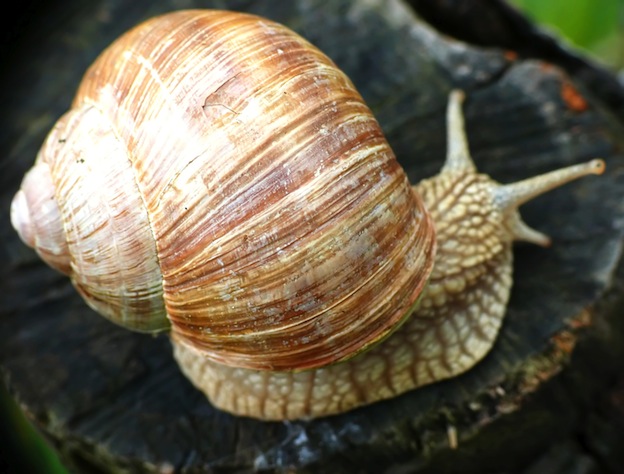 However has been moved by humans to Asia, Africa, Oceania and the Americas, where there is a huge industry of snail farming of this and some other edible species.

The helix pomatia habitat usually is below 2,000 meters above the sea level in places with mild temperature and high humidity. They do not dwell in places with a lot of light as they cannot tolerate direct sunlight.

Roman snails have a high resilience adapting to live in various types of habitats as result of the different areas in which they dwell. They typically prefer open temperate forests and areas of hedges, vineyards, and bushes. Their habitats are mainly sites of chalk and limestone with wet and mild temperatures. In contrast, they avoid areas with direct sunlight or where precipitations are high.

This herbivore maintains a diet that includes many fruits, vegetables, leaves, flowers, tree sap and other elements of plants. How do they consume their food? Like other gastropods, the Roman snail scrapes its food with the aid of a buccal structure called radula, which contains several rows of tiny chitin teeth.

Usually, the feeding activity of a Roman snail will be during the night, but you can find them during early morning hours or rainy days.

These snails need to consume a considerable amount of calcium to preserve their shells as hard as possible, and when they are not able to get it from their food, they will feed on some other materials which contain calcium, even soil or rocks.

The trails left on the ground when the snail moves are mucus produced by the foot and have an important function: facilitate movement on rough or very slippery surfaces. Also, it helps snails to follow their way back to the place where they were and return hours later, as a kind of reminder.

During the winter, Roman snails enter a state of inactivity that allows them to survive the low temperatures, like bears and other animals that usually hibernate. To do this, they first dig a hole in the ground and retract into their shell. Finally, they block the entrance with a layer of mucus called epiphragm, which helps to maintain its body temperature and protects the entry from organisms that could attack them. 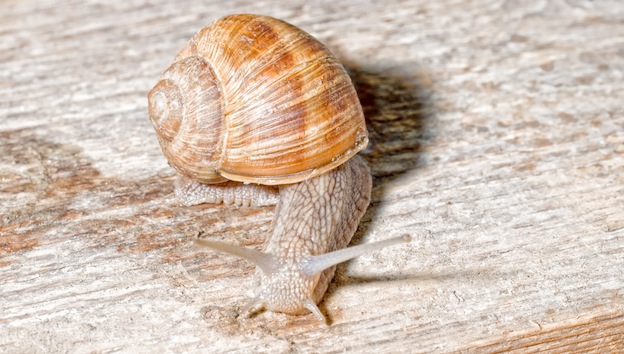 Helix pomatia lays eggs. However, these snails are hermaphrodite, since they have male and female reproductive organs. If they are going to mate with another individual, they do it during the breeding season that takes place in Europe at the end of May.

Roman snails reach sexual maturity between 2 and four years of age.
Before mating, individuals approach and touch each other; Then both shot each other into their skin the so-called “love darts,” sharp structures that stimulate mating. Then they are arranged to copulate during 4-7 minutes. When eggs are ready, they select an underground location where they place 8 to 30 eggs, from which baby snails born and do not receive any care from their parents.

This process can be repeated from 2 to 6 times in a year, depending on the climate conditions.

Roman snails appear in the category “Least Concern” on the Red List of the International Union for the Conservation of Nature (IUCN). They lack major natural threats, although some catch them for human consumption. In some European countries, they are under protection.

Roman snails main predators are insects, toads, centipedes, ground beetles, mice, and birds, being the eggs the most attacked.