The anatomy of a land snail is very different from most animals. Most of us recognize snails by their spiral shell, but this is not the only interesting thing about them. His body is a cluster of peculiarities and surprising data, not found in other animals.

Some people find them fascinating while others think they are pretty ugly. When you start to analyze all of the parts of their body, though, they have a unique anatomy and physiology.

The shell can be very different in size and shape depending on the species.

To analyze the external anatomy of snails, we will divide their body into the shell and the soft body that holds it. The former is a solid spiral-shaped structure carried on the back, made of a single piece and consisting mostly of calcium carbonate. The central layer of the shell, called ostracum, has two layers of crystals of the same substance, calcium carbonate. The Hipostracum is below, and the most superficial layer is the periostracum, composed of a lot of proteins.

The shell of a land snail can be very different in size and shape depending on the species. Some of them are cone-shaped while others are round. However, all of them have a spiral design, caused by the way land snails produce and growth their shells.

This structure protects the snail from the environment and even from predators. It is made up of calcium carbonate which makes it strong and remains that way as long as the snail consumes food with calcium.

Its surface can show different colors with fringe designs, but they usually are brown or yellow. The shell protects the body and internal organs of the animal and has an opening to one side, usually the right.

The rest of the body is soft, with a viscous texture and dark colors with gray or light spots. It lacks legs but moves thanks to a “muscular ventral foot.” The foot has a wave-shaped movement produced by muscular contractions that make the snail “glide” while the foot secretes a slippery mucus that reduces the friction on the surface in which it moves. This mucus is the “trace” that leaves the mollusk on the ground as it moves.

When snails sense danger around them, they hide into the shell.

The head, at one end of the body, has one to two pairs of tentacles (retractable and provided with tactile receptors), which have the eyes at the tips. The lower pair works as olfactory organs to smell. It also has an outer skin fold of tissue, which covers the internal organs and also usually covers the shell and the mantle cavity. You may not always see their tentacles because all land snails have the ability to retract them.

Some land species secrete a layer of mucus, which when hardened blocks the entrance of the shell and is called epiphragm.

When snails sense danger around them, they hide into the shell. Snails spend a long time in their shell when the weather is hot and dry. Otherwise, their moist bodies could dry out.

Snails vary in size and color. The largest are members of the family Achatinidae, of which the species Achatina achatina can reach a length up to 11.8 inches and a diameter up to 5.9 inches.

Inside, the body of the snails lack divisions. The internal organs, including gonads, intestines, heart and esophagus, create an organic mass protected by the mantle.

They are pulmonate animals, which means that they have a lung specialized in using the oxygen obtained from breathing the air from the atmosphere.

In contrast, they do not have a brain like that of dogs or humans. Instead, nerve cells concentrate in a set of ganglia and emit neurosecretions that trigger necessary actions like the release of hormones. The ganglia interconnect by bundles of nerve fibers that transport the signals at high speed. Although this is a rudimentary brain, they have an excellent ability for associative thinking. (1) 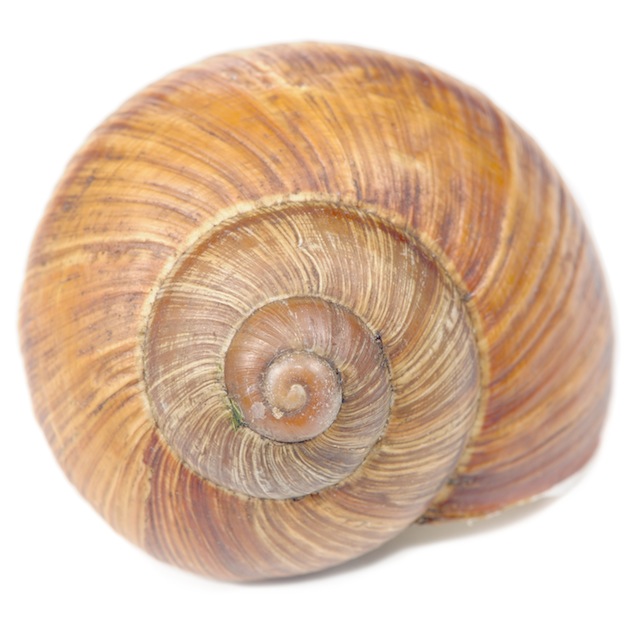 The sense of sight of snails is useful but only detect changes in the intensity of light to recognize whether it is night or day; They can move their tentacles up or down to improve their ability to see. However, they are practically deaf since they have no ears nor ear canal. To compensate this absence of hearing they have an excellent associative thought which helps them remember the places where they were or where the objects of their surroundings are.

Most land snails are hermaphrodites because each has both male and female reproductive organs.

The mouth of a snail is at the bottom of its head, just below the tentacles. The radula is a structure in the mouth of the snails. Similar to an elongated sack that has several rows of tiny teeth inside it that help to scrap the food instead of chewing; Then the food passes into the esophagus and other organs of their digestive tract. In the lower part of their soft body, they have the anus.

Most land snails are hermaphrodites because each has both male and female reproductive organs that produce both eggs and sperm. They are capable of self-fertilization, but usually, they copulate with each other.

The mantle is a protective layer that covers the foot and some internal organs. In some cases, it is also found covering the shell to offer it additional protection.

There is a unique process in the gastropod mollusks during larval development, known as torsion. The body moves from the back area to the front region, which causes a rotation so that the mantle cavity, which includes the anus, shell, and visceral mass, rotate about 180 degrees and are placed suddenly above the head and it seems that the shell is back.