– Snails are gastropod mollusks; members of the phylum Mollusca and the class Gastropoda.

– When they feel threatened, they usually retreat into their shell to protect themselves.

– The largest land snail is the Achatina achatina, the Giant African Snail.

– Snails have no backbone.

– Some land snails feed on other terrestrial snails.”

– North America has about 500 native species of land snails.

– The snails that just hatch the egg can eat their shells and even other eggs of their brothers.

– In France, edible snails are “escargot,” a word that also applies to a dish made with them, which is an appetizer.

– The courtship, process by which they attract each other before mating, lasts between 2 and 12 hours.

– In some places, people eat snail eggs, and call them “white caviar.”

– The mucus of the garden snail is used to treat wrinkles, spots, and scars on the skin.

– Most snail species are hermaphrodites, so they have both male and female reproductive organs.

– The speed of snails is around 0.5-0.8 inches per second. If they moved without stopping, it would take more than a week to complete 1 kilometer.

– Land snails cover the entrance of their shell with a dry mucus secretion called epiphragm, but a few do it with a structure, that in the aquatic snails, has the name of the operculum.

– Snails do not change shells when they grow up.” Instead, the shell grows along with them.

– Some predators of terrestrial snails are beetles, rats, mice, turtles, salamanders and some birds.

– Calcium carbonate is the main component of the snail shells.

– Snails host several types of parasites that, while may not kill them, they are capable of affecting or killing their predators or animals that eat the snails. Even humans who eat poorly cooked snails can become seriously ill.

– The food of land snails goes through a mouth structure called the radula, which has several rows of tiny teeth inside.

– Land snails do not chew their food. They scrap it.

– Land snails breathe thanks to a lung.

– A single garden snail (Helix aspersa) can have up to 430 hatchlings after a year. Just a single snail.

– The size of the shell of a snail reflects its age.

Some species of snails hibernate during the colder months of the year. They cover their bodies with a thin layer of mucus, which prevents them from drying out. Sometimes snails also do a similar process in the summer, called estivation, to survive if it is a dry period. These processes are probably one of the reasons they have survived for millions of years.

2. Snails can have a long life.

The life expectancy of snails depends on their habitat and the species. Some of them only live for about five years. However, others in captivity can live up to 25 years old.

3. There are giant snails.
The biggest land snail recorded was 12 inches long and weighed near 2 pounds. It was a Giant African Snail. Other species are tiny being only a few centimeters long when they are adults and just a couple of ounces in weight.

4. Snail Moving.
When moving, snails leave behind a trail of mucus. This mucus acts as a lubricant to reduce friction against the surface where they pass.

5. Snail Mucus.
It is a myth that snail mucus can make humans ill. Many people worry that the snails in their garden will ruin the foods grown there and make them unfit for consumption, but that is false. 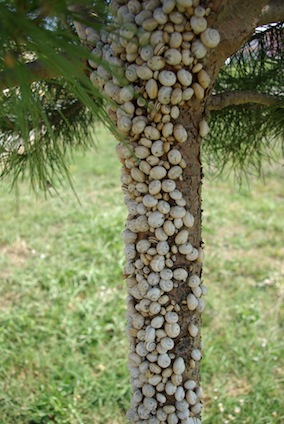 Garden snails (Helix apersa) reach a top speed of 50 yards per hour; this is about 0.5 inches per second. While they don’t move fast, they do move at a very steady pace. Snails are one of the slowest creatures on the Earth.

7. Snails are Hermaphrodites.
Snails have the reproductive organs of both, males and females, which categorize them as hermaphrodites. However, they usually do not create offspring on their own. They mate with another snail, and then both lay eggs.

8. Snails can see but can’t hear.
Most land snails have two set of tentacles, the upper one carry the eyes, while the lower one has the olfactory organs. However, they do not have ears or ear canal.

Snails don’t like the sunlight, which is why you find them out more on cloudy days. If you keep them in an aquarium, make sure that there is not too much sunlight in the room, or the snails will stop eating and hide inside their shell.

10. Get your size.
Snails length ranges from a few centimeters to 12 inches.

11. Snail Care.
Snails will die if you put salt on them. Make sure they are not in contact with salt if you have one in captivity because their body can´t process it.

13. Small, not weak.
Snails are strong and can lift up to 10 times their body weight in a vertical position.

14. Large family.
There are at least 200,000 species of mollusks out there including snails, although only 50,000 are classified.